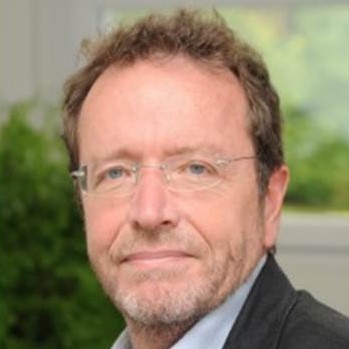 Eric Solary is MD, full-Professor in Hematology at Paris-Saclay University, is teaching clinical and biological hematology as well as cell biology. He created a first Inserm Unit « Cell Death and Cancer » in 1999, which became the Inserm Research Centre “Lipids, Nutrition, Cancer” in 2007, and headed a doctoral school in life Sciences and two federative Institutes of Research. He was the Scientific Director of Gustave Roussy Cancer Center from 2011 to 2020 and, since 2010, presides over the Scientific Committee of Foundation ARC, a cancer research dedicated charity. His research has been dedicated initially to leukemic cell resistance to cytotoxic drugs, then to cell death mechanisms and the link between cell death and differentiation in the hematopoietic system. His current research is focused on monocyte differentiation in normal and pathological conditions and the pathogenesis of chronic myeloid malignancies, with a special interest in chronic myelomonocytic leukemia. 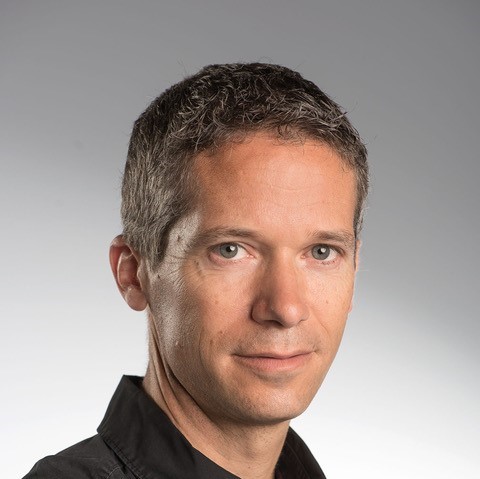 Jacques Fellay is a medical doctor and researcher, with expertise in human genomics, infectious diseases and personalized health. He is the founding director of the Precision Medicine Unit of the Lausanne University Hospital (CHUV); he leads a genomics laboratory at the EPFL School of Life Sciences; and he is the co-director of the Health2030 Genome Center in Geneva. The aim of his research is to decipher the genetic basis of inter-individual differences in immunity and responses to infections. His group explores the role of human genetic variation in the host-pathogen battle, in the hope of shedding new light on basic biological mechanisms and of paving the way toward more personalized approaches to health. He is currently also a member of the Swiss National COVID-19 Science Task Force. 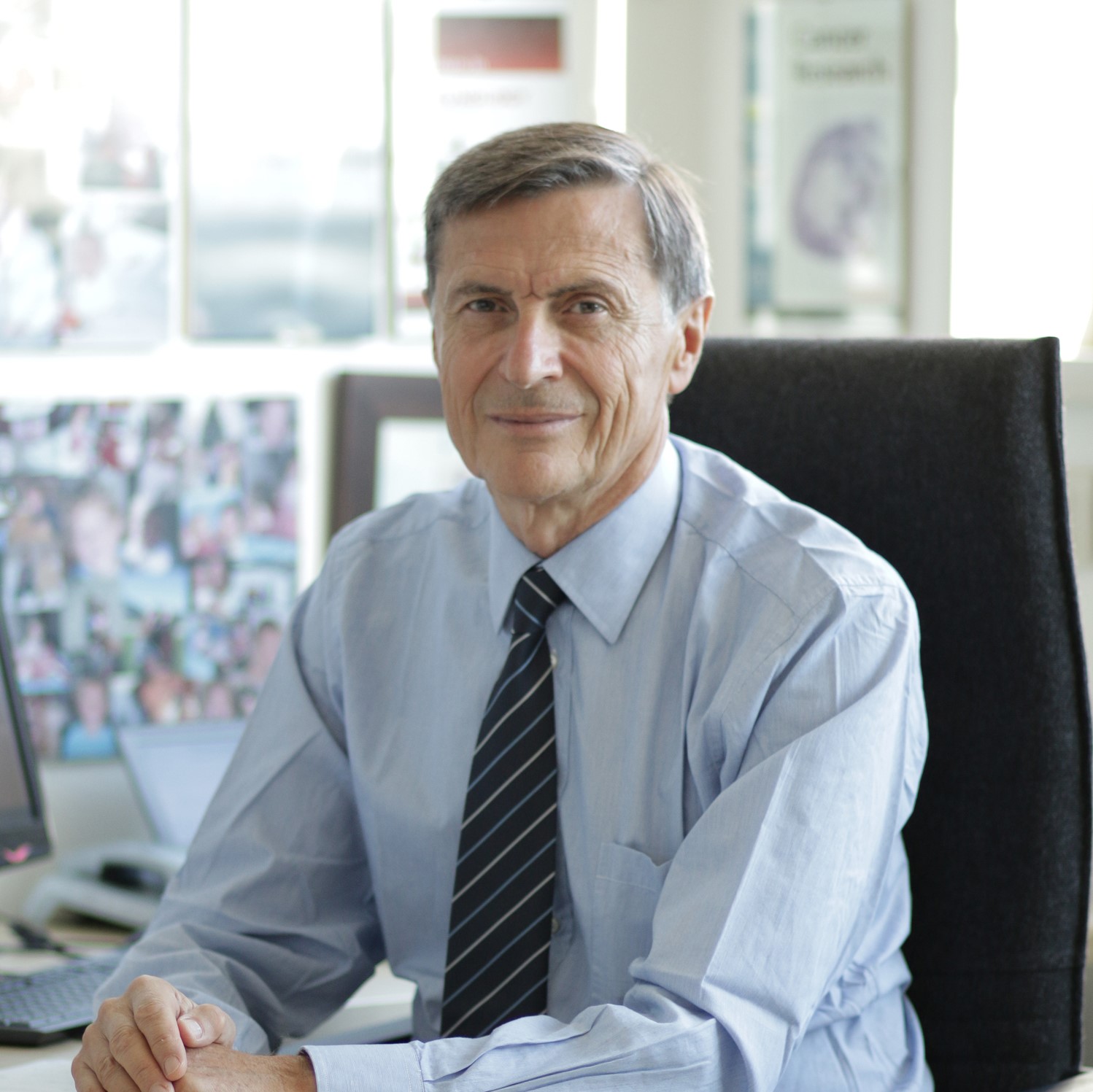 Alberto Mantovani, MD, is Emeritus Professor of Pathology at the Humanitas University in Milan, Scientific Director of the Istituto Clinico Humanitas and Chair of Inflammation and Therapeutic Innovation, William Harvey Research Institute, Queen Mary University, London, UK. His attention has been focused on molecular mechanisms of innate immunity and inflammation and on the role in the tumor microenvironment and cancer progression of tumor-associated macrophages (TAM). He has contributed to the advancement of knowledge in the field of Immunology formulating new paradigms and identifying new molecules and functions.For his research activity he has received several national and international awards, such as the Triennial OECI Award from the Organization of the European Cancer Institutes, the Robert Koch Award for his contribution to tumor immunology and immunotherapy, the American-Italian Cancer Foundation (AICF) Prize for Excellence in Medicine and, most recent, the American Association for Cancer Research International Pezcoller Award for Extraordinary Achievement in Cancer Research. The broad impact of his contributions is testified by citations. As of October 2020 he has over 129,000 citations and an H-index of 168 (Scopus). 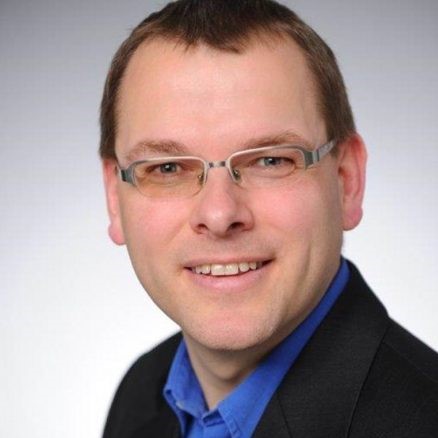 Oliver Cornely is Professor and Chair of Translational Research at the CECAD Institute of the University of Cologne. He is also Scientific Director of the Center for Clinical Trials, and Professor of Internal Medicine and Consultant in Infectious Diseases at the Department I of Internal Medicine, at the University Hospital of Cologne, Cologne, Germany. He received his medical degree (1994) from the University Hospital at Albertus Magnus University, Cologne, where he also completed his residency. He is board certified in internal medicine, infectious diseases, haematology, oncology, and emergency medicine. Originating from an HIV/AIDS clinical research group, Oliver Cornely’s research interest centers on infections in immunocompromised hosts, including invasive fungal diseases, antimicrobial resistance and Clostridium difficile infection. Oliver Cornely is past President of the European Confederation of Medical Mycology (ECMM), the roof organization of 24 national mycology societies, and did set up ECMM Guideline Program, ECMM Academy (Fellows program), and ECMM Excellence Center Initiative, designating clinical and microbiological centers after an international audit procedure. He currently serves on the Standards and Practice Guidelines Committee (SPGC) of the Infectious Diseases Society of America (IDSA), and on the Board of Directors of the Mycoses Study Group Education & Research Consortium (MSGERC). He is the founder and chair of the Infectious Diseases Scientific Working Group of the European Hematology Association (EHA). Prof. Cornely has published over 300 peer-reviewed articles. He is a reviewer for numerous medical scientific journals, editorial board member for Haematologica, Infectious Disease, and Editor-in-Chief of Mycoses. 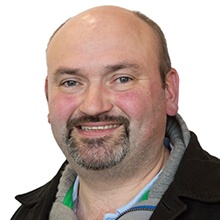 Dr Guy Cochrane is the head of the European Nucleotide Archive (ENA). The ENA provides a comprehensive repository for public nucleotide sequence data, attracting users from a multitude of research disciplines and serving as underlying data infrastructure for numerous bioinformatics services. Under Dr Cochrane, the team has launched important new services, including the Sequence Read Archive for raw data from next generation sequencing platforms and the CRAMtools sequence data compression platform. In addition to the leadership of a team of biological curators, bioinformaticians and software engineers, he contributes editorial work to a number of journals and meetings and has been involved in standardisation activities in many areas of bioinformatics. He received his PhD in cancer cell and molecular biology from the University of East Anglia in 1999 and carried out post-doctoral work in the molecular biology of photoreception at Cambridge University prior to joining EMBL-EBI.